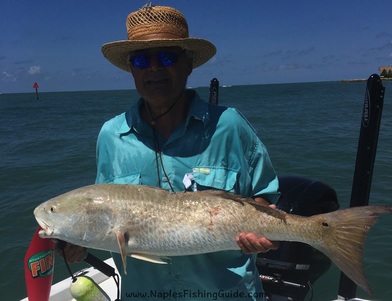 Red drum can be silvery-gray with a copper cast or bright copper colored with an iridescent gray cast. Color depends largely on the water the fish comes from. The belly is typically white. Most fish will have a single ocellated spot located just ahead of the tail fin. Occasionally, more than one spot can be found, and rarely, any spots are present.

Red drum, like many other members of the drum family, spawn in high salinity waters in areas of high tidal current flow, such as areas near barrier island passes. Spawning usually takes place over an 8 or 9 week period from mid-August to mid-October. During this period, male red drum stake out, in large numbers, the prime spawning areas in and near the passes, being ready to spawn virtually every night. There they form large schools at night, called drumming aggregations, because of the drumming sound that they make with their air bladders to attract females.

In the winter months the typical techniques used for catching these awesome fighters is a shrimp soaked on the bottom with a 1/0 hook and a split shot.  Gulf shrimp put on jigs and soft doa swim baits can also produce some great action.  These fish can be found on points and in deeper holes in the backcountry.  As the waters warm and spring brings back the pilchards targeting these fish with a pilchard under a popping cork can be most effective.  I love to chum the mangrove points and shorelines that have nice troughs and deep holes.

In the summer months begin looking for the big schools of mullet.  Cut baits and pilchards are the tools to tackle some mean fighting over slot fish.  Don't be afraid to cast directly into the schools of big mullet and you will be surprised what will be lurking directly underneath.

And in my book redfish tacos are truly amazing!!!