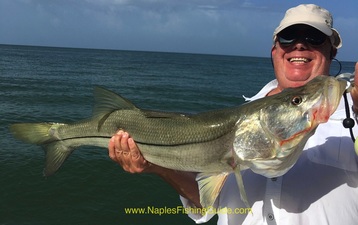 In the winter, snook flood the backwaters and offshore reefs, seeking creature comforts while continuing their terror tactics on just about any fish or crustacean that will fit within their maw. When a severe cold front pushes the freezing mark, they become lethargic zombies–yellow-and-white submarines listing on their sides. They’re easy prey for nets and even just a pair of hands, which is why the Atlantic side is December 15 to January 31 and June 1 to Aug 31 closure is so important.  The Gulf side closure is Dec 1 to end of Feb and May 1 to Aug 31.

On the warmer days, snook move from the deep water to the nearby flats, feasting on every available baitfish species that crosses their paths. Many times, it’s the tiny bay anchovy that suffers their ravenous wrath a hundredfold.

As spring approaches, their thoughts turn to food, then love, like an awakening bear fresh from winter slumber. Only this bear is on a mission to thin the early arrivals of pilchards, sardines and menhaden. At night, they gather along the shadow lines of bridges and piers, waiting in ambush for meandering mullet or menhaden. They stake out the channels and cuts through the flats, popping pinfish and sand perch. The fish feed voraciously, building up their fat supplies for the summer, when they’ll mass in huge schools at inlets, passes and along the beach for a warm-water “Love Connection.”

During lulls in the summer spawning ritual, snook compete for the limited amount of current-swept forage and are more vulnerable to angling based on sheer numbers. Protected status through the months of June, July and August allows the species optimal chances for reproduction.

Come fall, the slimmed-down fish will follow the mullet and other baitfish back inside, building their fat reserves for the winter ahead. It’s a full-bore, two-month feeding-fest, and every mullet coming around a point of land, seawall or dock can count on taking to the air. Mullet rain, the locals call it–feeding time, for the snook.

Gradually, the fish work their way up into the deeper creeks, where sun shining on the dark bottom will warm their weary bones on the coldest days. As temperatures drop, snook move around less and thus their nourishment needs diminish. They feed on warmer days, fast on the rest.

There are as many techniques for catching snook as there are food sources, but it’s hard to beat a live, hand-picked shrimp. In the cooler months, when the wind and tide come together to make the shrimp run, snook stake out dock and bridge lights at night, holding motionless in the current and plucking off the tasty crustaceans riding the tide.

A live shrimp freelined across the surface is an easy snook target. Placed 24 inches behind a pencil weight, the shrimp is led down the shadow line of a bridge like a dog on a leash, only to suffer through one of those shell-crushing audible pops.

In deeper, moving water, a shrimp pinned to a jighead is hard to beat, especially around docks and rocky areas bordering sandy bottom. No pop, this time. Just a solid thump!

Snook sure do love their shrimp when they can get them. But it takes a lot of shrimp to make a meal. Given a choice, most snook would opt for larger prey.

When the members of the sardine, herring and menhaden families are around, big snook aren’t ever far off. Because these baitfish have such high protein content, the lunker linesiders shadow the schools like truant officers waiting to bust anyone skipping ranks.

On light plug or spinning gear, a whitebait cast into a sandy pothole or along a mangrove shoreline is a living snook magnet, diving and surfacing as it searches out its own demise. Hooked through the nose, back or belly, the whitebait has a life expectancy of about two-and-a-half minutes, if any snook are around.

Live mullet make good snook indicators when they’re schooling. Hook one through the back so it swims downward, and it’ll rush to the surface if a snook crosses its path. Finger mullet catch snook of all sizes. Large mullet cut up can help catch the mega snook but you have to make sure you are not under gunned for the battle.

Take a dead mullet, cut off its head, hook it through the lips and pitch it out at the mouth of a marina or canal, and the first time the line comes tight, you’ll believe in the technique but probably lose the fish because you’re under-gunned.

But snook don’t just feed on the real deal. They’re suckers for a chartreuse or white Red Tail Hawk jig, worked just above the bottom where the bushy silhouette is just “too good” for a snook to ignore. Diving plugs get their share as well, as do darters, spoons and just about any lure that mimics a baitfish, shrimp or crab.

Probably the most exciting is the topwater plug, for the main reason that snook get really creative in their approach to this type of lure. The first time, a fish might track the lure from behind, rise and gulp it down with a lightly audible “puuh!” The next one will blow it out of the water. The next will hit it from the side, leaping first and crushing the plug on the way down.

Sometimes, a snook will strike the plug repeatedly, never finding the business end of three separate treble hooks. When the lure is returned to the same spot, the bombardment begins anew, yet with the same results.

In the end, it doesn’t really matter what tackle you like to use; that first good thump from a snook will draw you into the cult forever. Spin, plug or fly–who cares? Bust-Out and Go Fishing!!!