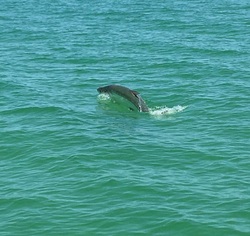 Naples & Marco
In this area, good locations are Cape Romano, the outside waters of Coon Key pass, Morgan Beach, Caxambas Pass, and the beach along Marco Island all the way to Doctors Pass in late summer.
There are also often baby tarpon in the canals that parallel the old Marco road, and in many of the backcountry bays nearby.
In general, most of this country is best for fishing natural baits or plug-casting, rather than fly fishing, because the blackwater rivers and the murky green of the bays allow little sight casting. If you move out into the basins and banks of Florid a Bay, you again find clear water and visible tarpon, but in close, fly casting is going about it the hard way.
In general, you fish'em where you see 'em in these areas, stopping to cast where ever rolling fish are spotted. At times, up the creeks in fall, you'll come on schools of` dozens of 5 to 20 pound fish, rolling and cavorting in little flowages barely wide enough to hold them. (Not so often these days, though, as a decade back. Some, including many members of the Florida Keys Guides' Association, are concerned that the reduction of small fish may bode ill for the future in this area.)